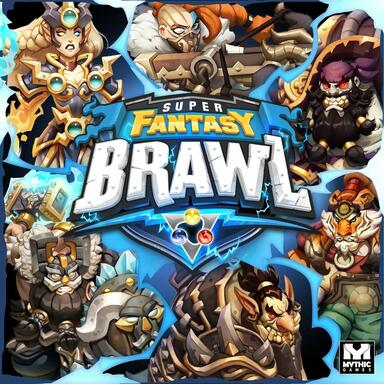 In the world of Fabulosa, magic has become so powerful that it has made wars obsolete. With nothing left to measure themselves against each other, the people became bored, and turned to the Super Brawl for entertainment. This same powerful magic is now being used to explore different time lines and kidnap the best warriors of all civilizations, who then battle it out in the greatest arena show ever organized.

Directed by game designer Jochen Eisenhuth and artists Johannes Helgeson, Bayard Wu and Stéphane Gantiez, Super Fantasy Brawl is a competitive, fun and fast board game with figurines. Players choose a team of three champions and combine their unique Action cards to create a set of synergistic actions. The game contains no factions, so players have the option of combining all champions as they see fit. Each turn, players use the Action cards in their hands to maneuver, attack, move their enemies and win objectives to score victory points. The first to reach the previously determined number of victory points wins the game, and progresses to the final victory of the great Super Brawl tournament.

As the wizards who watch the Super Brawl ensure that all champions can return to their timelines without any injury (or memory), no fighter is at risk of being killed. As soon as a champion is put out of action, he returns to the battlefield, while the opponent who has defeated him gains experience and becomes even more powerful. But beware, if your experienced champion has himself left the arena, he will come back in his less powerful version.