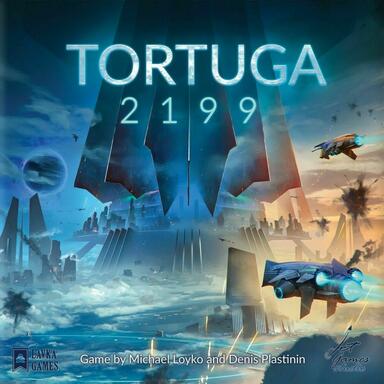 Tortuga 2199 is a deck-bulling game. Players play as a pirate ship captain who tries to impose his domination on the planet Tortuga. This game is distinguished by the presence of exclusive areas to buy certain cards. Players will also have to compete for control of the sectors.

Planetary Archives ... Tortuga - Former mining colony of the Interstellar Confederation. Distinguished by its aggressive wildlife and hostile environment. The planet is located within the neutral zone of the Omega sector. An important resource called Helium-3 is extracted. Since the miners' rebellion, the planet has come under the control of insurgents and disunited miners' clans. Unauthorized vessels of smugglers and private military companies have also been detected. Confederation ships are strongly advised not to go there.

In "Tortuga 2199", you play the role of a pirate ship captain. Your goal is to become the most powerful captain in order to unite all sectors and clans of Tortuga under your banner. Upgrade your ship and hire new crew members. Explore and conquer the different sectors of the planet. Confront creatures from outer space and board other captains' ships. All these actions increase your influence and help you to reach your goal! Good luck, captain! May the winds of space be favourable to you!

Toturga 2199 funded on the Kickstarter platform