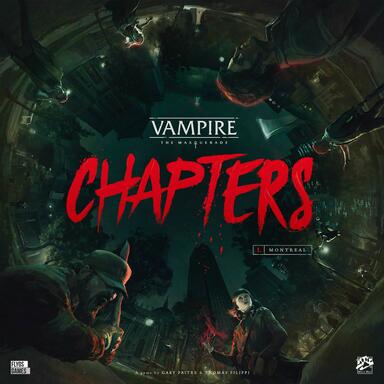 Vampire: The Masquerade - Chapters is set in Montreal, after the Second Inquisition and the fall of the Sabbath. Designed around three pillars - history, strategy and role-playing - the game fuses the best elements of RPGs and board games in a completely new way. Players' decisions will shape the adventure in a strong and mature narrative.

Play up to 4 players. Or solo. No Game Master required! The game is story-based: The campaign will feature a large number of scenarios. The story is designed to be immersive, scary and to keep players on the edge of their seats. Strategy: Depending on player approaches and decisions, some scenarios will unlock or lock forever. Player decisions will matter and affect almost every aspect of the game. Role-playing: Players have the ability to make decisions based on their character choices. They will create their characters and improve them over time with experience points.

Players will be immersed in advanced investigations, multiple choice dialog and powerful combat strategies. Players choose to play in one of Kindred's main clans (Brujah, Toreador, Gangrel, Ventrue, Tremere, Malkavian, Nosferatu, Paria) and encounter many different types of characters and enemies. The game is composed of several sealed scenarios to unlock, highly detailed tiles, cards, dice, at least 10 miniatures (one for each playable character), and surprises!

Vampire: The Masquerade - Chapters funded on the Kickstarter platform