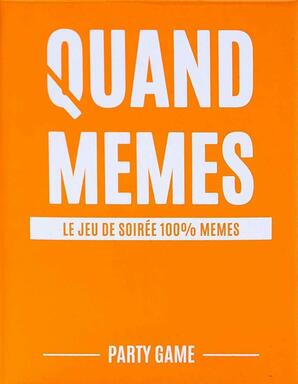 When Memes is a game of transgressive atmosphere, which plays on memes, those associations images/texts that make the rain and sunshine on the Internet. Transgressive, so much so that a "-16 year old" button is required on the box! The goal is simple: each player has 6 cards in his hand, with sentences based on "when... " (add a really dirty event in a row).

An image is revealed. You have to add the sentence that will do the job: dirty, hilarious, anyway, it's the judge of this round who decides. If he is still able, between two uncontrollable laughs, to decree who wins the image. The player who catches it is the judge of the next round. And so on, until the good taste and/or the pile of images is exhausted.

Transgressive, has anyone ever told you that? When even this is to be consumed without moderation, between consenting adults!