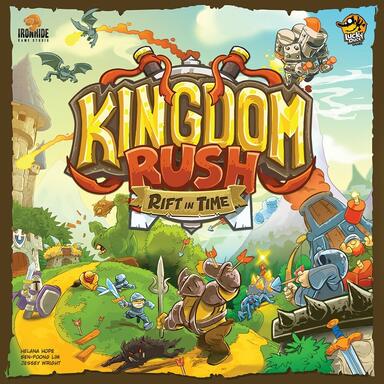 Welcome to Kingdom Rush: Rift in Time, where you and your allies must work together to repel the furious assault of the mysterious Time Magician. Order Heroes and build Towers to defend the kingdom by placing polyomino pieces to attack your enemies and deploying soldiers to hold back the ever advancing horde. But be careful! The Time Mage portals are wreaking havoc, which means that all the towers are distorted in and out of existence! Will you play your tricks to defend the Kingdom, or will you pass them on to your compatriots so that the tricks can be improved? It's up to you to decide!

Play through a unique campaign to thwart the Magician of Time's plan. Each new scenario in the campaign is more difficult than the one before it, with formidable enemies, game-changing events and epic bosses to face! The only way to stop the Magician is to close all their annoying portals, but you will have to do so while fighting wave after wave all the minions. Fight with unique heroes, special abilities and an impressive arsenal of evolutionary tricks. The Time Wizard will stop at nothing as they try to seize the Kingdom and neither will you - the archers are ready!

Kingdom Rush: Rift in Time funded on the Kickstarter platform