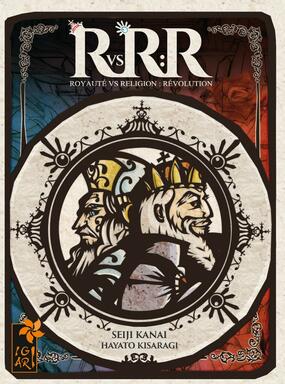 Since the dawn of time, power has been bewitching. Neither wise princes striving for justice and fairness, nor men of faith spreading the word of God can resist it. In this land where peace has long reigned, a little bird whispers in the ears of the sovereign King and in those of his holiness the Hierophant. One person should rule this country," he said, "and you are the Chosen One. »

Thus, a silent struggle for domination begins between the two powerful. Brave generals and beautiful princesses sit at the king's side. Devious cardinals and noble saints sit at the Hierophant's side. And other spirits, with their own goals, wait for the opportunity to side with the victor. It is a war of wills, charisma and power, which has engulfed the whole nation. And no one knows the outcome of this confrontation.

Each of the two players embodies the leader of the Royalty or the leader of Religion, and will have to gain the most influence thanks to characters represented by tiles. They will place these on a 3 by 3 board representing the Kingdom, and the person who has the most allies in play when the board is completely full will win the game.

Each character has a specific power and can make the other characters change sides thanks to their charisma, conspire, or use their magic to force them to withdraw. It's all about strategy to make the best placement at the best time. In addition, neutral characters, different for each side, are available to both contenders. The judicious use of their very special and powerful powers will be crucial for the battle. All information is visible. Will you be able to surpass your opponent's strategy and control more than half of the kingdom?