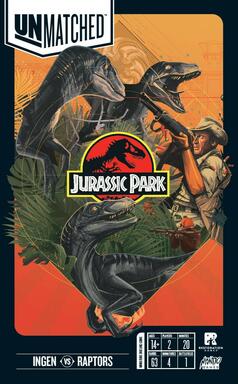 In battle, there are no equals. They demonstrate extreme intelligence, even problem-solving intelligence. Especially the greatest. He has hunted many dangerous predators, but against a pack of raptors, is Robert Muldoon the hunter or the hunted? In Unmatched: Jurassic Park - InGen vs Raptors, these intelligent girls use their speed and agility to surround their prey, becoming stronger when they attack together. InGen's gamekeeper and his security team set traps to slow their opponent down and attack from a distance in a game that has been brewing for 65 million years.

Unmatched is a highly asymmetric miniature fighting game for two or four players. Each hero is represented by a unique deck of cards designed to evoke his style and legend. Tactical moves and the resolution of unlucky fights create a unique game experience that rewards expertise, but as soon as you master a game, new heroes arrive to give you new matches.